Tis the season to be merry....

Unless you live in a place named Murphy's Cabin.

Oh, I wish I could say that I had that lovely Christmas in the mountains and woods that one imagines when you look at the photograph of the cabin. You know, snow falling softly from a midnight blue sky, drifting quietly onto green pine trees, amidst twinkling Christmas lights, as you sit by the crackling fire, roasting chestnuts and singing Christmas carols....

Of course, neither did I have an actual Murphy's Christmas. In fact, I chose not to spend Christmas at Murphy's at all. I instead went to the nearby ski resort, and had my family come visit the area and spend the holiday with me.

This was lovely .... There was a Christmas tree even! A very "old fashioned" tree, that ended up being our Syracuse Tree...

You may see why: they ran out of red velvet ribbon at my local Costco (!), and so I purchased the blue and what came closest to the red velvet in my mind. Seems I might be a bit color blind... 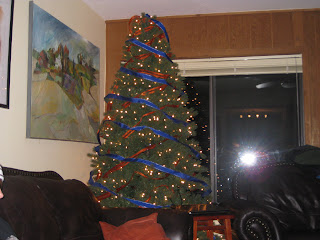 As yes, my brother, a proud Syracuse alumnus, took one look and said "Cool. A Syracuse Tree."

So orange and blue are the new colors of Christmas...

Of course, Murphy's Cabin does have an extended reach -- as I've mentioned in previous posts. After all, half of my family ended up sick (with my nephew being diagnosed with bronchitis even), and none of the skiers in the family got in more than one day of skiing. Oh, and I decided that I actually could handle staying up till morning and drinking for several days in a row, despite now being well past 19. Actually, it turns out that I can do such a thing -- I just now need recovery time.... 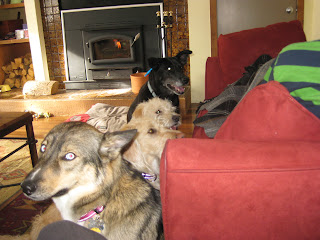 (A captive audience for a pizza slice held by my nephew...)

But never fear, Murphy's Cabin did ensure to make an appearance... We chose to "pop" over there for a hike one day, and I decided to check messages. Only to discover that my phone was dead. Totally, completely dead.

I check outside at the box where the phone line comes into the house. Yep. Dead. At least it's not inside the house -- and so won't cost me a repair bill. So a bright side, right?

Except that I call the phone company and put in a repair ticket -- and get a call back from the repair man who has made a trip to my home before.

Oh, did I not mention that the phone line has gone dead before? Yeah, my only "real" and "guaranteed" connection to the outside world is not exactly guaranteed it seems. Or at least when there are utility trucks around that happen to have tall portions. It seems these tall trucks have a habit of hitting the phone line that stretches across the trail head and drops down to my house, and knocking it down. On the last visit, Mr. Nice Repairman put a nice bright orange flag on the line. This seemed to work. Seemed.

Which means back to the present day and present story: Mr. Nice Repairman quizzed me about the problem. I proudly announced that I did, in fact, not only check the phone line outside the house, I also checked the phone line stretched across the trail head, and it seemed intact. Seemed.

Mr. Nice Repairman's response? If there was a problem with that line, I could be in trouble. As my house is the only home on that line -- it is a solitary drop-down line to my house alone. So if the line is broken or a problem, the phone company might be hard to convince to replace or repair it out of the goodness of their hearts.... IE: This could be a hefty repair bill.

I guess I have not repaired or replaced every single thing possible at Murphy's Cabin.