Since I dedicated an entire blog post to Hollow, my "coydog"... er, husky -- I thought this time I might dedicate a blog post to Rilke -- my "first born".

Of course, first born is a matter of interpretation since no one seems to have any idea how old Hollow is -- or, frankly, what she is. But, I consider Rilke my "first born" as he is the one I first adopted. I have had him for more than a year now, and he is indeed my darling brown-eyed boy....

As really, he has the most adorable brown eyes....


I mean, seriously -- can you resist these eyes?

He has a certain sweetness and adorableness that is hard to resist -- even when he's jumping on you. (As I still have not cured him of that.) He truly, simply, has "Soul" -- and yes, I say that understanding I implied in my last post about Hollow that I was not sure she does...

As it appears he may also be a thief...

Yes, you read that right. A thief. I have a frickin' master criminal on my hands!

A few weeks ago, I started waking up every morning to new discoveries on my drive. Now, under the circumstances of where I live, this could clearly be worrisome in a very negative and bad way.

Well, it is worrisome, and I suppose in a negative and bad way -- but not as bad as one would think.

It appears my boy is a toy thief.

The first toy was a clearly hand made doll -- that he picked up on a hike we were on, so I just assumed some child in one of those back pack carriers had dropped it, the parents had never noticed, and now my dog had a new toy.

Then suddenly a decapitated stuffed bear showed up. I will not dare to surmise whether my dog did the decapitating or not.

Yet still, I did not worry -- it was a few toys, here and there. Most likely dropped and / or abandoned on the trail. This sort of stuff happens.

But then it seemed to happen more often, and suddenly my attention was caught. Especially when we left for our morning hike, and Rilke is happily playing with a stuffed Goofy...

And then the next morning, when I woke up -- looked out on my drive and saw this:

And upon closer inspection, discovered this:

And then the next day? I left at night to drive down to the nearest city to visit friends, and as I'm attempting to make my way up my snowy, icy drive, I hit the portion of my drive where it levels out for a bit. For fear of losing momentum, and not making it up the rest of the drive, I start to gun it just a bit -- and just as I do, I notice at a bunch of toys scattered across the drive....

Unfortunately, I couldn't stop for a photo (for fear of not getting out of my drive!), but holy crap. There was at least 6 toys lying there!

(All of which are now buried in a snow drift, as while I was gone, it snowed, and my plow guy simply plowed up the snow and the toys -- though Rilke did manage to dig one out upon our return.)

Either my brown-eyed boy has found a toy chest to raid, and has been methodically doing so -- or a pack of coyotes has taken a shine for him, and is presenting him with toys....

And really? Does any one think coyotes are so generous or thoughtful? I.Think.Not.

So yes. I have no choice but to accept that my darling, soulful, sweet puppy has become a thief. A master thief. What does one do with that???

But he is awfully cute with his stolen toys, especially his stolen Goofy -- which he daily brings with him on our morning hikes.... 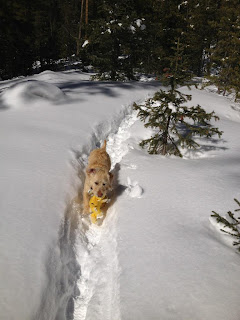