No Soup for You!

I am cooking soup today, and so that has inspired me.... No, not exactly to write (though obviously I am as I peck away at this blog), but to write about some of the things that motivate me.... At least in a very roundabout way. Because it's never fun if we just straight out and say something!

I have a very dear friend whom we lovingly refer to as the Queen of Demotivation. Her super secret super power is to completely demotivate you during the day. You could have lots of activities -- fun events! -- planned, and they will all go out the window. Defenestrate. Swoooooosh!

In fact, I think my favorite anecdote about the "Queen" is the time I came home from a board meeting in the early afternoon one Saturday to find her on the couch, comfortably lazing about watching a movie. And no. That's not the funny part. The funny part is that our other friend was sitting on the other couch, still on the edge of her seat, still in full ski gear (pants, jacket, hat and gloves on the seat next to her), with a glass of wine in her hand, fully engrossed in the movie. Considering the lifts closed in about an hour, and it would take 30 minutes to get to the lifts, clearly she was not actually going skiing today. And yet.... And yet...

And yet, hope springs eternal. Even around the Queen of Demotivation.

I, on the other hand, am the Queen of Procrastination. What, you may ask, is the difference? A very very very important -- yet seemingly minor -- one: I'm actually quite productive, just absolutely never on the actual project I am supposed to be working on.

I fix problems around the house; I once built an entire pantry in a closet in the kitchen of my rental. Yes, rental! I read articles upon articles; attempting very disingenuously to claim it as research (pretty sure the latest on Oscar Pistorius' murder rap is not in any way relevant to anything I'm writing -- despite the fact I am finally working on a novel). But the best procrastination, according to my friends? I cook. Crazy, feeding an army, let's try an entirely new recipe, what-the-hell, cook.

Last week, it was gumbo for Mardi Gras. And yes, I have never even eaten gumbo, let alone ever made it. And yes, I -- because I'm super smart that way -- decided to follow three (3) -- three! -- different recipes to make it. Slightly confusing. I also -- because I'm super smart that way -- decided I would make roux the first time ever in my life -- gluten free. Yeah, pretty sure that bean flour and xanthan gum may have something to do with why the roux took more than an hour. But hey! A friend who lived in Louisiana for several years said it was the most authentic gumbo she'd ever had! And another friend who grew up in Alabama eating a lot of Cajun food said it was "damn good"....

For those of you who are brave and have a lot of time on your hands, I mostly followed this recipe (brought to my attention by said Alabama friend). But I also followed portions of this recipe (especially about the okra), as well as bits and pieces of this recipe. Best trick of the day? I bought a rotisserie chicken at the supermarket deli, and stripped it for the chicken meat.

Honestly though, I couldn't tell you exactly what I did, or why it worked. But it was indeed damn good.... 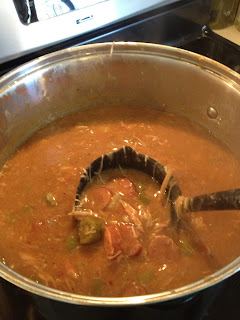 Today's procrastination? Squash soup and baked potato soup. I wish I had recipes to share, but neither of these were found online. Suffice it to say, I can vouch for the squash soup (one of my long time favorites), but, of course, have never made the baked potato soup before. I promise feedback later.

The reason why I'm cooking? And why I am cooking two different kinds of soup? First, because cooking makes me happy. Second, because -- obviously! Duh! -- I am procrastinating. Third, because cooking actually -- in the very very -- very! -- long run -- motivates me, especially to write. Fourth, because I'm hosting book club tomorrow night, and it seemed very appropriate that we required options when the book we're reading is "Deep Survival: Who Lives, Who Dies, and Why".

It's a fascinating book. Certainly it has its flaws, but it provides a lot of grist for thinking and contemplating. Gotta love a book that quotes ancient Greek philosophers! (Particularly relevant since apparently Plato and Socrates, and Plato's Cave specifically, are playing a huge role so far in my novel or short story, or whatever-the-hell-it-is that I am writing.) The thoughts to chew on? The deceptively complicated idea of whether you are a true "survivor" or not. The answer is not as simple as it may sound -- having knowledge of survival is definitely key, but what is far more important is inner grit and fortitude; and, most of all, a will to live.

Those issues may seem simple, and at a distance, it is easy to believe one does indeed have inner grit and fortitude -- and of course, seems blatantly obvious that one would have a will to live. What is shocking, is how rare those things actually are. I know, for example, that for years I scoffed at the idea that I would not have any of the above. How hard is it to suck it up? And certainly, how hard is it to want to live? Good grief! Right...?

I then spent that time alone at Murphy's Cabin, very very alone. And very much with no one to rely upon but my own sense of self, and my own hope for what I could accomplish. As certainly at the beginning, it was no more than hope -- no more than inner grit. I'll admit, grit was never in question -- but fortitude and a will to live, to thrive, were very much in doubt. After all, I've been called "stubborn to the point of stupidity" far too many times in my life. Damn if I wasn't going to do it! I was going to do it, or die trying. And that is not necessarily what makes a survivor....

Yet I did persevere. I did pay attention, learn to listen (to myself and what was around me), learn to learn -- learn to live. Truly live. I learned a lot about myself, about my inner grit, fortitude, and, most of all, about my will to live. As it is not living if you don't understand what "truly living" means. As Socrates said, "An unexamined life is not worth living." And let's face it: It's amazing what spending some time understanding that you truly have no one else to rely upon but yourself will do for your understanding of your "self". And thus of the "examined life".

Though I'd like to say "kids, don't try this at home" -- I can also say it was one of the most profound experiences in my life. And yes, I do know now that I have true inner grit, fortitude, and most of all, a very true will to live. Though one's life is never completely examined, I now know how to pursue that process. And why it is so important. Which is even more critical.

Of course, does that mean I'll actually survive were my plane to crash in the jungle or on a mountain top? Not necessarily. But I do know that I'd have a damn good -- like my gumbo -- fighting chance. And isn't that all we ever really need to know? That we have a "fighting chance" at life?

But, right now I'm not fighting to live on a mountaintop (anymore) nor in a jungle nor anywhere crazy at all. Right now, I'm simply fighting to write creatively, and to cook some hopefully damn good soup. That's actually all in my life now -- as I'm trying to practice what Lao Tzu said, my quote from yesterday: to be in the present, to be at peace.

So, if the will to live matters, than choices at the dinner table should matter too, right? After all, sometimes the will to live is merely a matter of having something to live for: for me, it's my friends and loved ones, my dog, and the ability to do things that make me happy, like cook.

So. Read the book. And maybe there will actually be soup for you!
Posted by Jana Novak at 1:38 PM