Not much to see here folks, move along....

So, in case you were dying of curiousity -- which I know you were -- I have finally uploaded the photographic evidence of the heating "disaster".

As really, even I know that the word disaster is a bit too strong.... I mean, it's not like when the septic tank failed. Now that is a disaster in terms of mountain living.

Seriously? How would you feel seeing this come down your drive? 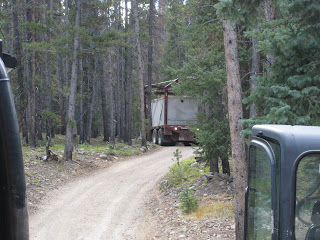 Or saw this baby being lifted over your back yard? See that puny child of a man? Yeah, that's what I'm talkin' about.... 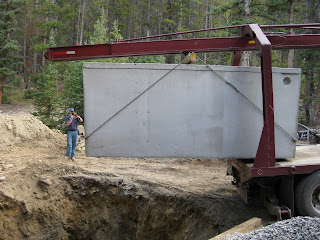 Okay, let's face it. You would have been like me: giddy as a school boy. Oh. My. God. It was cool. I mean, that tank is solid precast concrete. Do you know how much it weighed? How big it was? If I still had a camera that uses film, I would have gone through a box of film rolls.

So maybe "disaster" is all how you look at it. As yeah -- it is not exactly fun to have your septic tank fail, but it is most definitely fun to watch a new one being installed.

Which just means the heating "disaster" is all about how I look at it.... For example, I'm sure gylcol is really good for one's hair. I'm sure it provides excellent conditioning qualities. Sure, yeah, that's it. And I learned something new, and it is always important to learn something new every day. Sure, yeah, that's it. So really, it was all just a walk in the park....

And because it was such a pleasant walk in the park, and such a wonderful learning opportunity, I thought I would share more of it with you....

The leak exposed! Due to the "brackets" that hold the tubes in place, it originally seemed as if it were two leaks, but in fact, it was just one -- one leak dripping out of two seams, because it was an ambitious leak. This picture was actually of the spray -- not that my camera managed to capture the actual action -- because it was not actually a leak per se (which in my mind conjures imagines of a steady stream of liquid), oh no. It was a spray. In fact, spray is not descriptive enough. How about "projectile spitting"? 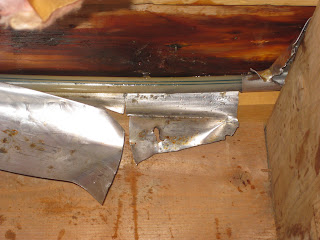 The culprits -- carpet tack strips that had been nailed into the subfloor with nails longer than the subfloor was deep. Because one doesn't bother to think that dimension through when one has in floor radiant heating. Of course not. (And for those starting to make snarky comments, no I did not install the carpet.) 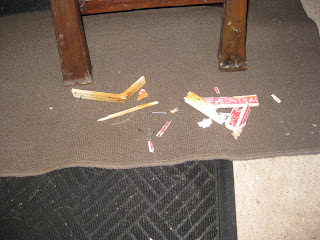 A close up of the culprit -- tack strip in place surrounding the pillar holding up my little balcony on the second floor. 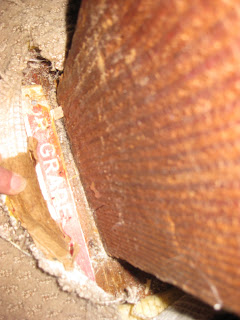 Actually, make this one the close up of the culprits -- those really dark stained nails? Yup. Damn bastards. For good measure, in honor of my mother: Little shits. 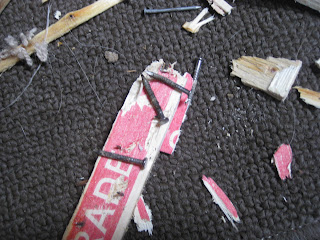 The pillar, the couch, the culprits -- the "let me give you perspective" shot. 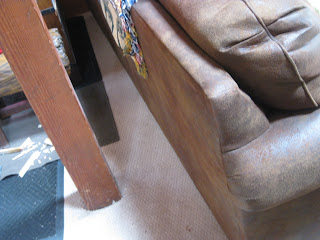 Yes, I did move the furniture by myself. Because I am She-Ra. 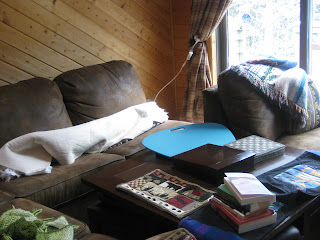 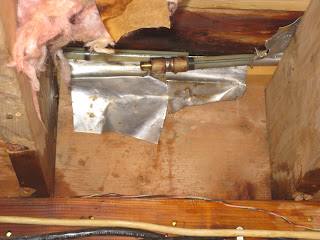 Tada! The fix! And you may also note what the bracket should look like (top of picture), and how much work went into this repair by the mangled metal, and oh yeah -- the ahem, "trimmed" beam. Because it is always safe to saw into one of your support beams.... 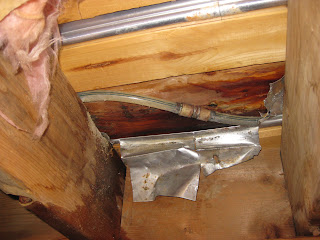 The other side of the now "trimmed" support beam, showing how the tube with its new repair valve now must "loop" instead of sit straight in the bracket. The weird tank at the base is part of my water system -- it helps remove some of the carbonation from my water as, seriously!, my water comes out of the tap carbonated. Because yes, I am so fancy and ritzy that I shower in Perrier.... 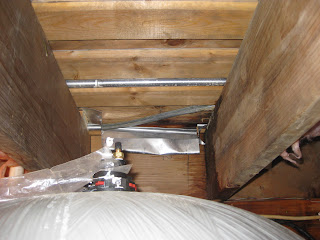 This would be another one of those "perspective" shots. And oooh, look! You can see my water filter supply on the shelves in the back.... Because I believe in the Boy Scouts motto. Or something like that... I think it's more like the "7 Ps": Proper Prior Planning Prevents Piss Poor Performance. 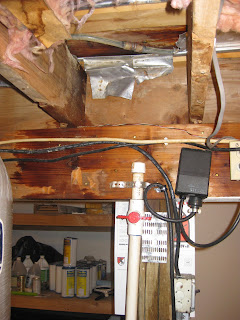 Oh, and all that electrical? Part of the water system -- well pump, cistern pump, timer for the "recirculating" pump... Don't ask. 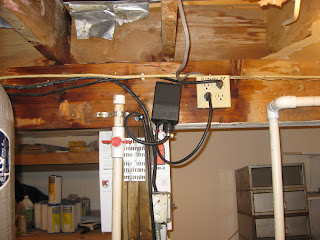