It is time to formally introduce my dog. Ahhhh. Rilke. So little to say, so much time.

Rilke is now just over a year old. We know a bit about his provenance in that we do know for a fact that his mother was a yellow lab. His father..... well, his father is another matter entirely.

The "suspects" (and yes, that is how it was phrased!) we were told were a standard poodle and a wire-haired daschund. You can see which one was the more likely of the two: 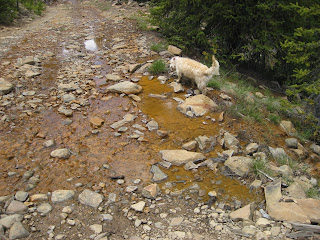 My initial vet also suggested terrier, and explained to me (in the perhaps TMI but incredibly fascinating category) that with dogs, multiple male dogs sperm can survive and remain in a female dogs uterus -- allowing each dog in a litter to be from a different daddy dog, and to mix more, etc.

I don't know about all that, but I can tell you that he definitely shows major terrier characteristics. He is also unbelievably (sometimes laughably so!) alpha. Despite his small stature, he believes he rules his kingdom. And yes, he definitely thinks it's a "kingdom" and definitely think it is his.

Rilke is actually pronounced "Rill-key". But he is named after the German poet, Rainer Maria Rilke. Rilke was considered "one of the most significant poets in the German language" with "haunting images [that] focus on the difficulty of communion with the ineffable in an age of disbelief, solitude, and profound anxiety."

He was my mother, Karen Laub-Novak's , favorite poet, besides T.S. Eliot, I should note. And I should also note (more like remind, as I have noted this before, but goodness knows why should you remember that!) that my mother died in August 2009, had a profound impact on me, and I "blame" her for my purchasing this cabin.

So really, Murphy's Cabin is all her fault. Because yes, I do believe in not taking responsibility!

So puppy Rilke got his name in honor of my mother, in a roundabout way. Because it is actually an honor to have a dog named after you. Seriously.

But the entire reason I am talking about Rilke is not just because he is a huge part of my life -- my companion and even partner in this crazy adventure -- but because of his special talent. It seems that if there is an animal bone anywhere -- and I do mean anywhere! -- within a mile of Rilke, he will find it.

I don't know if its a good nose, a curious appetite or a personal mission. But it has become quite the experience for me.

Just consider how I felt when I saw this running towards me: 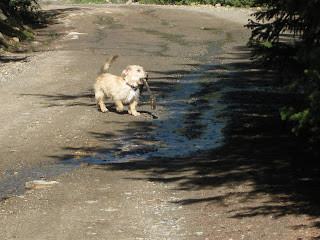 Or got to see this: 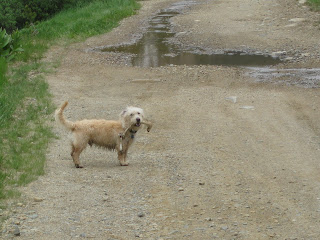 And in case you can't appreciate that picture, here's the close up: 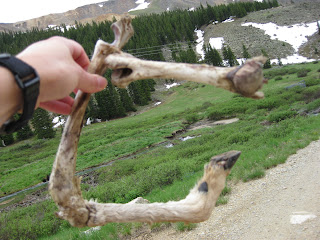 A little "collection" of his finds: 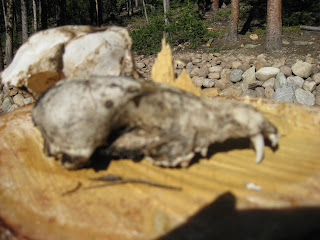 Ah, and the fun of seeing this running at you (and yes, that is an entire elk leg, from the hip to the hoof): 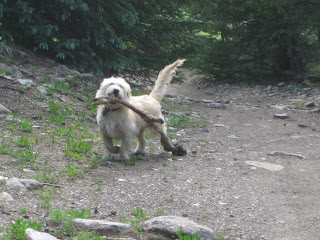 And then of course the reason for the title of this post: 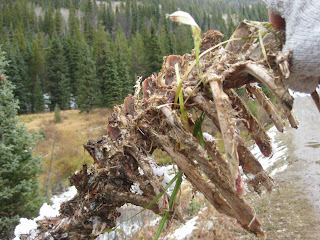 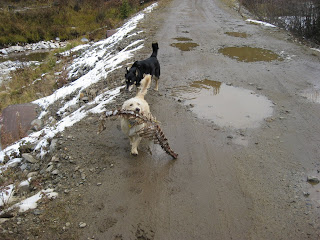